A few weeks ago, the U.S. Fish and Wildlife Service announced that the oldest known American bird in the wild was a Laysan Albatross named Wisdom. Wisdom was 60 years old and she had just produced a chick on the Midway Atoll in the Pacific where she breeds. Then came the earthquake and the tsunami. All over the area, seabirds and their helpless chicks were swept out to sea and drowned by the thousands. It was initially feared that Wisdom and her chick were among them.

But Wisdom hasn't survived 60 years in the wild by being stupid. Her nest and her chick were on higher ground. National Fish and Wildlife Services personnel soon were able to verify that the chick had survived. But Wisdom was nowhere to be seen. This was not necessarily indicative of tragedy though, because albatrosses often spend days cruising and feeding over their ocean home before they return to feed their chick. And so it proved to be with this bird. This week she returned. 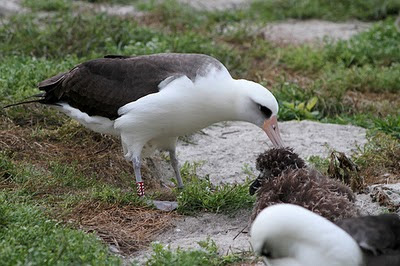 Barry Stieglitz, Project Leader of the Hawaiian and Pacific Island National Wildlife Refuge Complex, said of the bird's return: "Although wildlife biologists generally manage at the level of populations, we, too, become entwined in the fates of individual animals. Wisdom is one such special creature. She has also provided us with valuable information about the longevity of these beautiful birds - in her case over 60 years - and reinforced the importance of breeding adults in the population. It is very humbling to know this 8-pound bird has been producing chicks longer than I have been alive."

In 60 years in the Pacific, Wisdom has no doubt survived tsunamis before, and now her story provides one small victory, one tiny point of light in an otherwise dark ongoing tragedy.
Posted by Dorothy Borders at 9:12 PM