The lunar eclipse that was visible in the Americas and Asia on Wednesday was the biggest news in the world of Nature this week. The so-called "blood moon" made quite an impact on all who got up early that morning to witness it. And one has to admit, it was quite an amazing sight.

From Nebraska, via the Virtual Telescope Project. 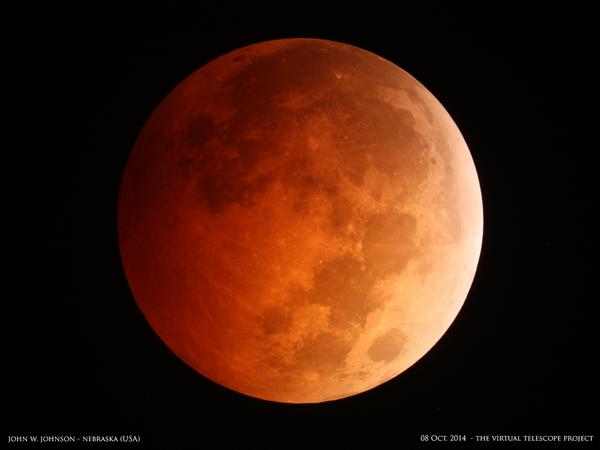 New studies are finding that scientists have grossly underestimated how much and how fast the oceans have warmed up since the 1970s. Much of the heating up of the atmosphere is actually being absorbed by the oceans. They are one of the planet's safety valves to protect itself, but they are being overtaxed to the detriment of life in the oceans and particularly to the detriment of another of the safety valves, sea ice, which is melting.

Biofuels offer a promising alternative to fossil fuels as a source of clean energy, but it is important for the environment to choose the right biofuel. It turns out that the grasses, such as switchgrass, are much better than corn. The grasses offer appropriate habitats to many grassland birds that are slowly disappearing - species like the Dickcissel, the Bobolink, and the Eastern Meadowlark - as well as other wildlife. Corn is more of a barren desert as far as wildlife are concerned.

Over fierce opposition from some mountain communities, President Obama has carved out roughly half of the Angeles National Forest in California to create the San Gabriel Mountains National Monument. This will give the U.S. Forest Service greater authority to manage crowds and protect the area's natural wonders. It marks the thirteenth time that Obama has used his executive powers to establish or expand a national monument without congressional approval. He follows in the footsteps of his predecessors in the office who have seen creating a monument as a way to enhance their legacy.

The parks department in New York City is working to restore long-neglected lakes and ponds in its system to health once again.

It seems that even mosquitoes have flying blood-sucking parasites! Seems like karma, doesn't it? There is a variety of midge that actually attaches itself to the mosquito and feeds on it. So, that mosquito that is sucking your blood may be supporting itself and another critter. Feel free to slap it anyway.

Ah, you thought it was October? No, it's "Arachtober"! A month to celebrate those wonderful arachnids that fill such an important role in the ecosystem. Just keep repeating, "Spiders are our friends!"

And let's don't forget about crickets - especially Southern Oak Bush Crickets, those green crickets you might see around your yard. "A Bug Blog" has an appreciation of them.

Kuzya, a 23-month-old Siberian tiger that Vladimir Putin assisted in returning to the wilds of far eastern Russia in May, has swum across the Amur River into China. (Yes, it seems that even the Russian tigers have territorial ambitions.) Unfortunately, China is a hotbed for poachers of tigers and conservation officials are understandably concerned. They are hoping the tiger will swim back across the river. Meanwhile, officials in China, possibly fearing an international incident, are hastily attempting to find and track the tiger.

In an intriguing discovery from the world of archaeology that was announced this week, cave paintings have been discovered in Indonesia that are believed to be as old or older than the famous cave paintings of Europe. They are on the island of Sulawesi and are mostly images of human hands and of animals.

The Ferruginous Pygmy Owl, formerly protected under the Endangered Species Act, was removed from that protected list in 2006, but several conservation groups say it is now time to protect the bird once again as there are only 50 of them known to be left in Arizona and there are steep declines of the population in Mexico. They are suing to have the bird returned to "endangered" status.

When we consider the evolution of the horseshoe crab, we find that it has, in fact, hardly evolved at all in thousands of years. Today's critters are much the same as their ancestors in the Jurassic period.

Orange and black are dominant colors of the season and that is true in the world of beetles as well. "Beetles in the Bush" has some pictures.

Why is it that so many species, introduced from other places in the world, are able to readily adapt to their new surroundings and many become invasive nightmares? For example, Burmese Pythons in Florida or House Sparrows everywhere. Scientists are turning to Darwin's theories of how evolution works to try to understand.

Posted by Dorothy Borders at 12:52 PM